Marina Volkova, a jazz singer, composer, voice coach is herself a unique musical phenomenon. After studying with one of the best academic voice coaches of the country, Marina Gromova Marina as many others before her fell in love with jazz music. Marina starts listening to the records of Sarah Vaughan, Ella fitzgerald, Carmen McRae, Billie Holliday and other great jazz musicians and also taking lesson from Irina Rodiles, a well-known Russian jazz singer. According to Marina the greatest mystery in her way of understanding jazz was the swing. “I kept asking jazz musicians “What is swing? They just shrugged their shoulders”. That is a question with no answer – swing is something one can only feel. I could have asked them what love is just as well”. Surprisingly but it was Michael Jackson’s music that helped Marina to find the answer. His sense of rhythm as thrilling and untranslatable as the swing helped Marina to feel the swing. Besides, Marina was very much influenced by the “lessons” of the one and only Sarah Vaughan, the divine one: “I kept listening to her “Swinging Easy” album. I could be riding my bike than just stop somewhere in a field and sing along with Sarah not noticing the time”. The feeling of swing and Sassy’s lessons had the desired effect: in 2009 Eve Cornelius, one of the best jazz singers in the USA, visited Russia and performed with Marina the famous jazz standard “All of Me”. According to Marina, that performance was some kind of a landscape for her career - Eve Cornelius, her gorgeous voice and most importantly her ever swinging mood helped Marina to understand once and for all that jazz was that she wanted to do for life. In 2009 Marina participates in Anna Buturlina’s First Moscow Contest of Jazz Singers. Together with that she starts working on a lounge new jazz project “Perfect Me” as a singer and composer. With the project ensemble she participates in the 9th International Jazz Festival “Jazz Koktebel-2011” in 2011 and then recorded the “Rounds” album. When working with “Perfect me” Marina assembled the Marina Volkola Jazz Band, the jazz quartet, including her husband, Sergey Vasilyev, a well-known bass player, and at different times Pavel Timofeev, Roman Dmitriev, Vladimit Luiso, David Tkebuchava, all of them one of the best Moscow jazz musicians. In 2013 Marina performed with Daniel Cramer within a benefit event. Many times performed at the concerts of Vahagn Hayrapetyan, a prominent jazz piano player, and then together with Vahagn Hayrapetyan, Sergey Vasilyev and Pavel Timofeev recorded such jazz standards as “Just You, Just Me”, “When I Fall in Love”, “Slap That Bass”. Since September 2012 Marina has been a voice coach at Moscow Luna Theatre. Marina’s students are the performers of such famous musicals as the “Lips”, “Chant éclair” and “Liromania”. Marina’s singing sparkles with exquisite intonations and amazing sense of swing. Every time through performing any song she tells us her own story which everyone is longing to hear again. 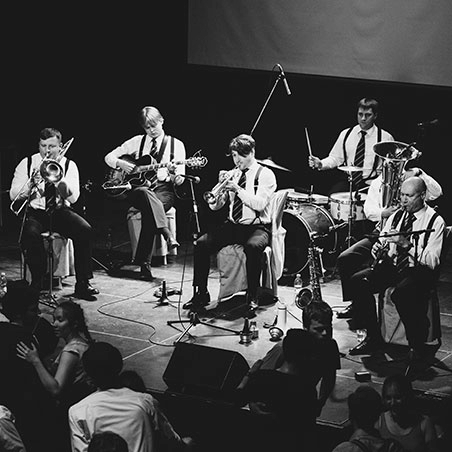